Post local St. Patrick’s Day parade celebrations and waving our young son’s rugby team on with pride, we made a break for it and went west just like this namesake’s holiday was forced to…to the Clonalis House where we found our magical hidden pot of weekend gold.

A weekend retreat on St. Patrick’s Day at the Clonalis House…

Escaping, however, at our own free will, a planned weekend retreat with friends in rural Roscommon.  Clonalis House, and its owners, were a breath of fresh air.

Set on the O’Conor family farm in the magical Irish countryside, the large Steward’s House was ideal for two families of four.  In other words, there was ample space downstairs for four wild kids to run around in. And, the adults could choose between two living rooms with fireplaces to unwind in the evenings.

Upstairs there are two twin rooms and two double rooms, all very roomy, with two bathrooms, one en-suite with a bath and another shower.

Marguerite checked us in and made us feel very welcome and comfortable. It didn’t take her long to pick up on our accents which sparked a heart warming conversation around her own experience and connection to South Africa.

What to do on an enchanting estate in the Irish Countryside…

We had the luck of the Irish on our side with the kind of weather we’re more accustomed to in South Africa. Perfect for a tennis match or several (bring your own rackets and balls).

Which isn’t the only way to while away the hours on this enchanting estate, especially in effervescent sunshine! Above all, nature abounds! Take a gentle stroll along the Suck Valley Way, play Pooh sticks over a beautiful bridge or take a wander through woodland somewhat similar to A A Milne’s 100 Acre Woods.

Wrapped up in our own Pooh sticks play, we came across a man named Pyers ambling along on his bicycle with his special dog Dommie. After that a delightful conversation ensued. He shared a little about his family’s heritage of the land, before he kindly extended an invitation of a farm tour the following day for the kids. We, of course, eagerly accepted!

Pyers, a man of his word showed up the next afternoon on his quad bike, trailer attached for a fun farm ride! In addition, he surprised us with fresh and chocolate eggs! Therefore, we had very happy kids!

The conclusion of our magical time spent at Clonalis House…

Above all, we had the most wild and wonderful St. Patrick’s Day long weekend connecting to people and a place in this corner of Ireland’s hidden heartlands.  This made Clonalis House a Magical Hidden Pot of Weekend Gold.

Wander to the end of the rainbow and discover this authentic family treasure!

“Like all great homes, Clonalis has a soul. By nurturing and sharing it, we retain its beautiful magic.”– Pyers O’Conor Nash 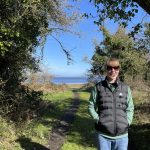