You know that bag of souvenirs that you have sitting around your house from all your travels that you swore you “would do something with it one day”? One of the best ways to show off where you’ve been is to put it on the walls of your home. Sure, you could just put all your ticket stubs into one box that says “Been There, Done That” but let’s get a little more creative with personalized shadow boxes! Check out this video I created for the perfect keepsake: a DIY travel shadow box.

While I studied abroad for four months in 2019 to 8 different countries and over 35 cities, I accumulated pictures, ticket stubs, pamphlets, brochures, stickers, key chains – you name it, I’ve got it. I wanted a way to create something meaningful for my adventures and memories that I’ll remember for the rest of my life.

I will admit I bought all my materials a year ago right when I got back from abroad, but at that time life just got in the way so that bag of items just went into the closet for a rainy day or quarantine to happen, I guess. So, with all this time on my hands I decided my project needed to be completed. It only took a couple of hours, was fairly cheap and so fun to remember all that I had seen and done.

So how did I get started on my Travel Shadowbox?

Well first I needed to find the perfect shadow boxes. Unfortunately, Amazon does not sell the 2 pack of shadow boxes I used anymore, but there are tons of options. I originally started with 10 x 10 but found that too small for the picture letters I made for some of the countries. I used 12 x 12 boxes, 11 x 14 would also be a good option I would recommend. Michael’s has a great 12 x 12 , 2 pack option and the company promotes a 40% off coupon each week, just Google Michael’s coupons.

Once you have your shadow boxes, you know you need to print your favorite pictures from your trip. When printing pictures, imagine what picture you think would be good for each letter of the country/city and print extra pictures! This way, if you don’t like the picture you originally picked, you have a different one in front of you. It’s also fun to have a couple of pictures in your shadow box cut out. I usually print my photos at Walgreens because there is often a discount code. I highly recommend downloading the app Honey onto your laptop! Honey is a super cool app that scans a bunch of websites online to find codes that save you money and its totally free.

Now that you have your pictures…

You can either freehand cut out your letters or print letters using Word. Then cut those out to be traced to the photo. I printed out the letters that I needed in Word in the largest font bolded. This isn’t an exact science and I had to play around with this a few times. I decided the best way to get the thickness of the letters I wanted was to add an extra 0.5 cm around all the letters when I cut them out of the printed paper, I just eyeballed this. I will admit this was the trickiest part of the project because I wanted it to be perfect, but nothing is perfect.

Once I had my letters cut out…

I found the pictures that I wanted to be used for the letters. I laid each letter on top of the photo of what I wanted to be shown and traced it using a chalk marker. This way if I wanted to move the letter to a different area in the picture, I could just rub it off with my finger, so the picture wasn’t totally ruined. For letters like D or A that needed to be cut out in the middle I used a box cutter & Exacto knife.

I used 12 x 12 boxes, so I didn’t have to cut the white scrapbook paper very much. The background paper helped a lot for measuring out the spacing of letters and gluing items down instead of to the actual shadow box. With the letters cut and items picked out, I then got out a ruler to measure out the letters on the paper. Depending on the size of your shadow box and how long the country or city name is, you can adjust how your spacing works. For example, I left only a half-inch on each side of the edge of the paper because it took up so much space for Ireland. Rather than the other countries I did where I had an inch on each side. This part takes patience so make sure you have time on your hands. You don’t want your letters to be crooked! 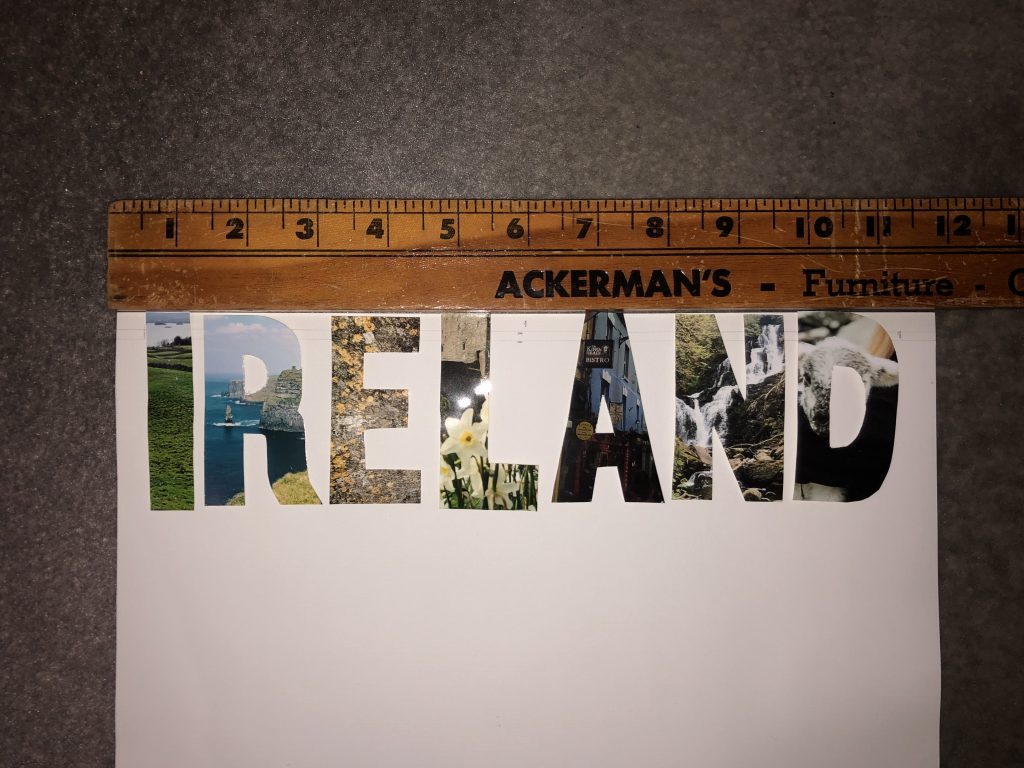 A reminder to look at how the shadow box is situated! My paper laid on a small ledge so I needed to leave around 2 cm around the whole background paper so nothing would be cut off. To help with your letters being placed down, I recommend a halfway mark with a pencil and a mark where you want your letters to end on each side of the paper. Then, lightly draw a line across the top of the paper where you want the top of your letters to be, this will help with them being lined up. If you zoom into the photo on the right, you can see some of the marks I made and also the lines of where I would place the top of my letters.

With the hard part done…

I gathered up all my letters and items to design the layout of my shadowbox. Tip – take a picture of the layout so you remember what it looks like! Once this was complete, I took off the items except for the letters so those could be glued down first – I just used Elmer’s glue stick. Then, start layering your items to be glued down via hot glue or Elmer’s liquid glue.

And voila, you have completed your shadow box! Show off your creations and tag me on Instagram to your post @jessie_mahoney.

Check out my YouTube vlog of my adventure in Ireland!