6 Things You Have to See During One Day in Genoa, Italy

When traveling to Italy, there are many destinations that make it onto everyone’s list: Rome (of course), Florence, the beauty of the Amalfi Coast, but many don’t think to head to Genoa. Although it’s not a major tourist destination, it has been an integral city of Italy for hundreds of years. As the capital of Italy’s Liguria region, Genoa was once a maritime powerhouse and one of the most crucial ports in the country from the 16th-19th centuries. The natural harbor created by its borders was used by the Romans even further back than that. Despite being the 5th largest city in Italy, Genoa feels largely untouched by commercialism and tourism. Walking the streets you’’ll be side-by-side with locals just going about their daily lives. Being near the border of France, Genoa is also the gate to the Italian Riviera. Trains that run through Genoa can take you on to the many stunning small towns that line the Mediterranean sea, including the beautiful region of Cinque Terre. In fact, we took the time to travel from Nice to Genoa because it was a perfect midpoint on the continuation of our trip into Italy. What was supposed to be a layover city before our next train became one of the most interesting parts of our trip. Below is a list of what to see in Genoa in one day, perfect for if you’re passing through like we were.

For lodging, I highly recommend the Best Western Plus City Hotel. This hotel was so clean, the staff was super friendly and it was centrally located in the middle of Genoa. We were able to easily walk to all the destinations and hot spots listed below within our 24 hours in the city. We loved it! 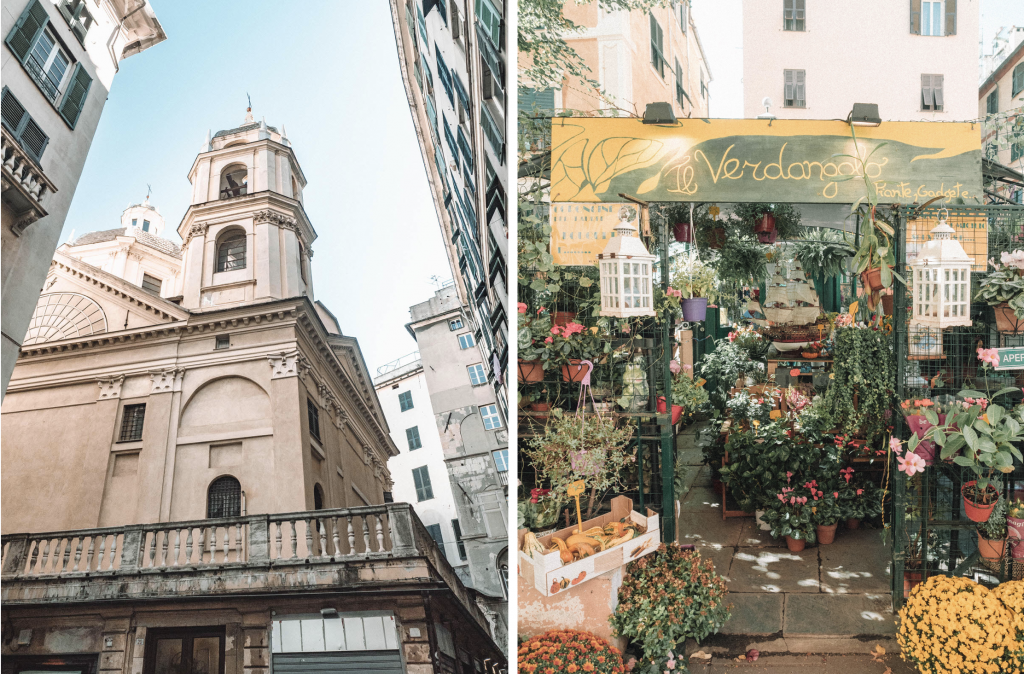 Immerse Yourself in Ligurian Culture in One Day in Genoa Italy

Gulp down a shot of espresso in the morning and spend your day getting lost in the maze of streets in Genoa. These small paths turn into even smaller back alleyways where you’ll be surrounded by the sights and sounds of Italy. The bell of a bike may ding in the distance, an almost miniature-looking truck may wiz past you carrying the day’s bread, or an old woman may drip water on your head as she hangs her clothes out to dry on a wash-line above. On your route, make sure you stop for a bite of foccacia, a staple of the region, perfect for lunch or just a grab and go snack. Take the time to enjoy a foreign city that isn’t overrun with tourists and go out of your way to purposefully get lost (with a map in your back pocket just in case).

One thing I noticed about Genoa was the beautiful architecture. Almost every step I was tempted to stop and take a photo of another building. Genoa is a mix of classic Italian structures with columns and ornate details and the bright, bold, almost rainbow colors found along the Mediterranean; as if buildings from the Gothic Revival period were mashed together with the iconic colorful homes in Cinque Terre. The more temperate climate of being near the sea also allows for a lot more greenery than other larger cities of Italy that I’ve visited. Throughout Genoa, buildings are dotted with plants and vegetation making the whole town feel more alive.

Stroll Down Via Garibaldi

One of the most stunning displays of Genoa architecture is Via Garibaldi. This thoroughfare is granted the designation of being a UNESCO World Heritage Site and is lined with gorgeous palaces on each side. Via Garibaldi is perfect for a casual afternoon walk. Take the time to explore since many of the palaces and courtyards are free to visit and take a peek into. You can pop in and out of the doorway of each as you make your way down the road. Many of the palazzos encourage music performers and piano-players in their courtyards so you’re often serenaded on your walk. It will really give you a feel for what the opulent life of the wealthy in the 17th century was like.

Explore the Many Piazzas of Genoa

Many of the winding streets will lead you to countless open piazzas, even if you’re only spending one day in Genoa. One of the most impressive is the Piazza di Ferrari home to a spherical fountain at its center and surrounded by cultural institutions such as the Stock Exchange, the Theatre Carlo Felice and the Headquarters for the Ligurian Region. Head away from the Piazza down Via XX Settembre for affordable shopping at European staples like Zara and H&M. You’re sure to stumble upon many more beautiful piazzas as you explore the city including the Piazza de Portello and the Piazza della Nunziata, both near Via Garibaldi. 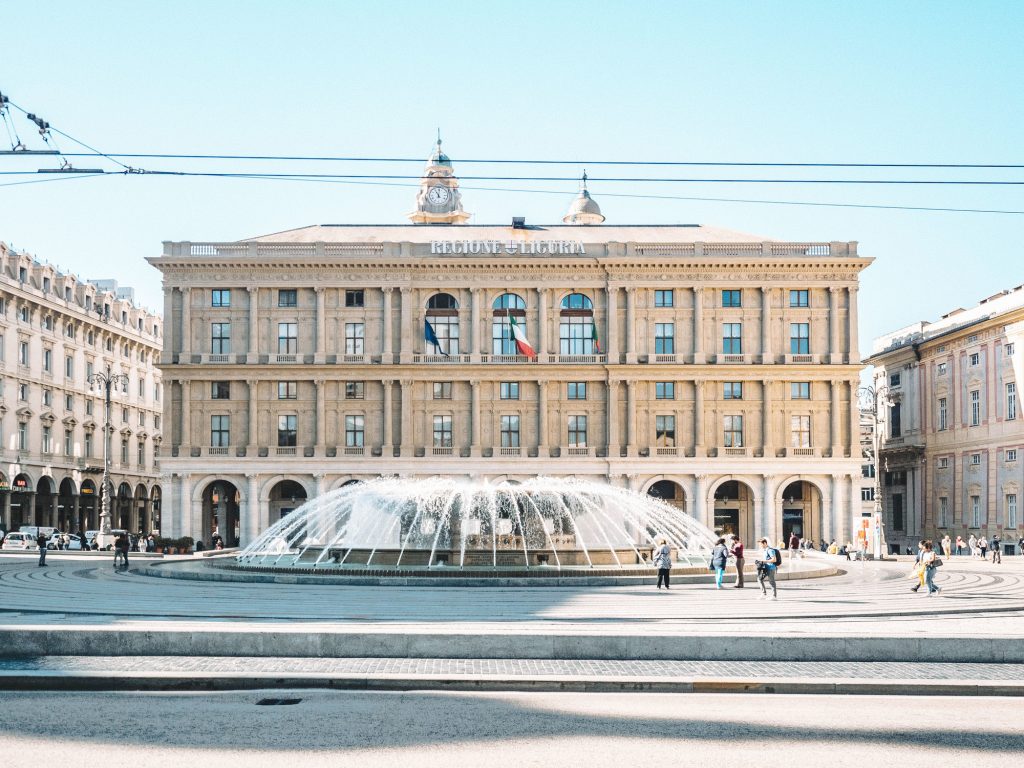 Dive Into the Maritime Museum and Genoa Aquarium

Heading towards the water will lead you to the Porto Antico, or Genoa’s Old Port, home to the Acquario di Genova. The Aquarium is the largest in Europe with over 70 tanks holding over 15,000 marine animals. All of the aquarium sits within the backdrop of the Gulf of Genoa. The town also proudly celebrates its rich history on the water at the Galata Museo del Mare (the Maritime Museum). Walk aboard an actual submarine moored in the port or learn what it was like to live on the ships of the past. 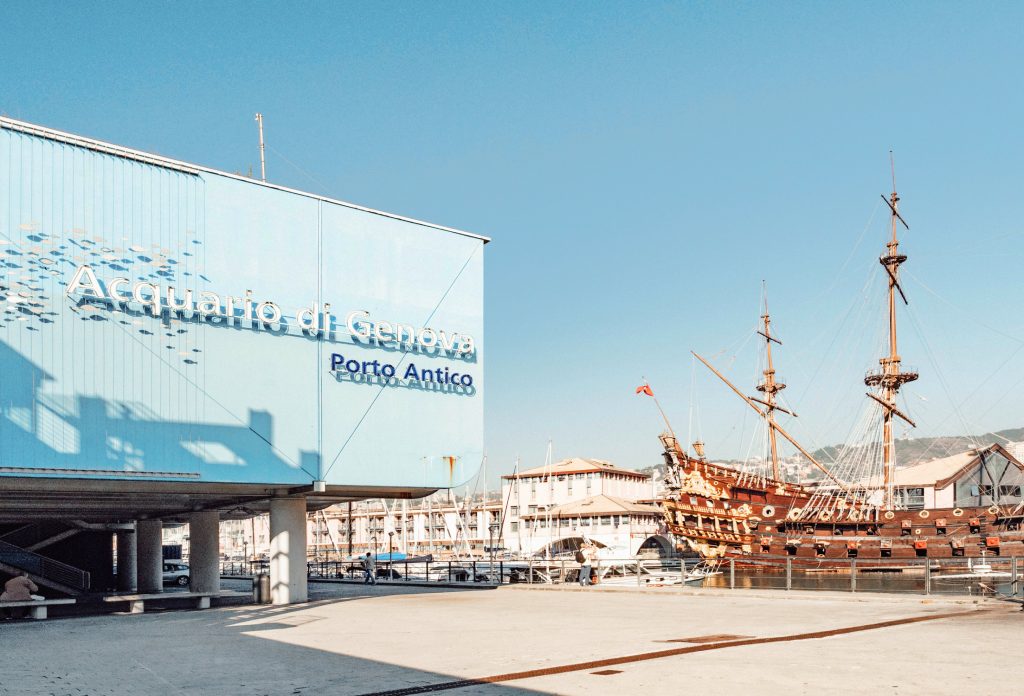 Genoa’s Old Port may seem surprisingly new but for good reason. In 1992, the city of Genoa organized a massive celebration to commemorate the 500th anniversary of Christopher Columbus’ voyage to America (Columbus lived in Genoa but it’s rumored he was born in Calvi, Corsica). The whole port received an unprecedented makeover by the well-known Italian architect Renzo Piano for the event. Because of this, the large square that overlooks the Mediterranean is about as touristy as the city of Genoa gets (which honestly is not very touristy at all). The most iconic feature of the port is the Bigo Panoramic Lift, an almost artistic sculpture that looks like a massive white crane with arms reaching out and hovering above the water. The smaller arms provide support for the structure while the longest arm contains a panoramic carriage that rises over 130 ft in the air for unparalleled views of Genoa. It appears as a massive white octopus emerging from the water, protecting the local boats that are docked in the marina. The port is also home to La Bolla, or The Bubble, a biosphere housed on a floating platform in the water (seen between the two palm trees in the photo below). The Bubble is a glass greenhouse with over 150 species of plants as well as birds, reptiles and butterflies. It’s amazing to see Genoa embracing their heritage on the water and really putting it on display in every way possible. From being home to some of the best water-related museums in Europe to incorporating their attractions with the water itself, it really shows the pride that the people of Genoa have for their city and culture. 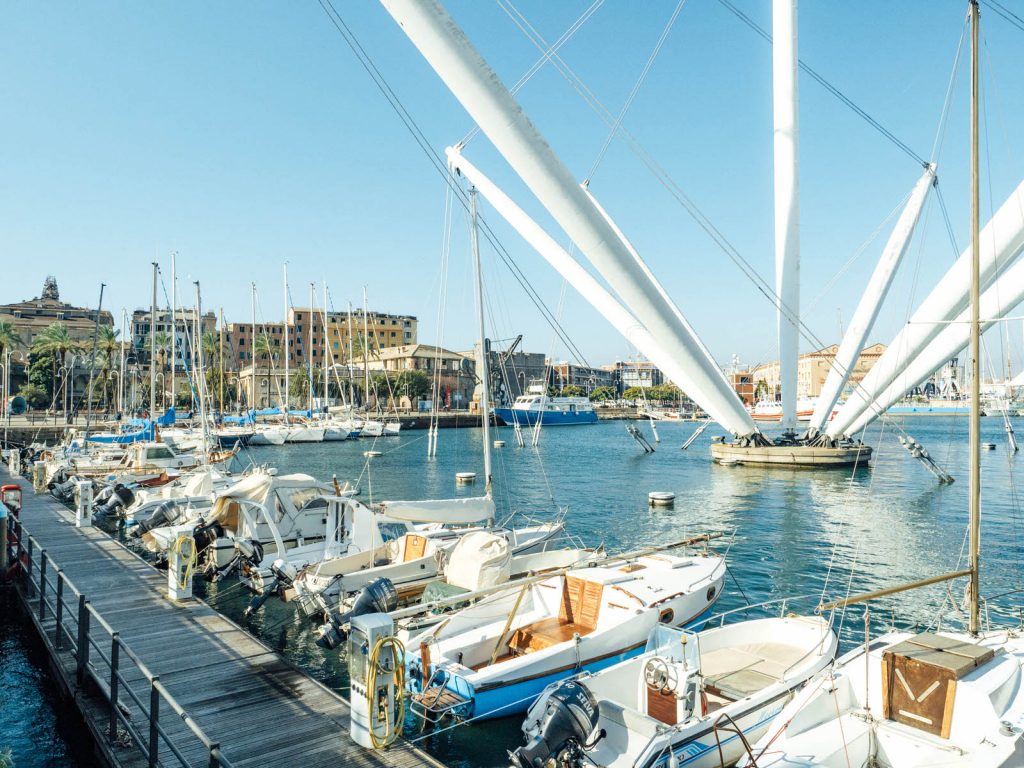 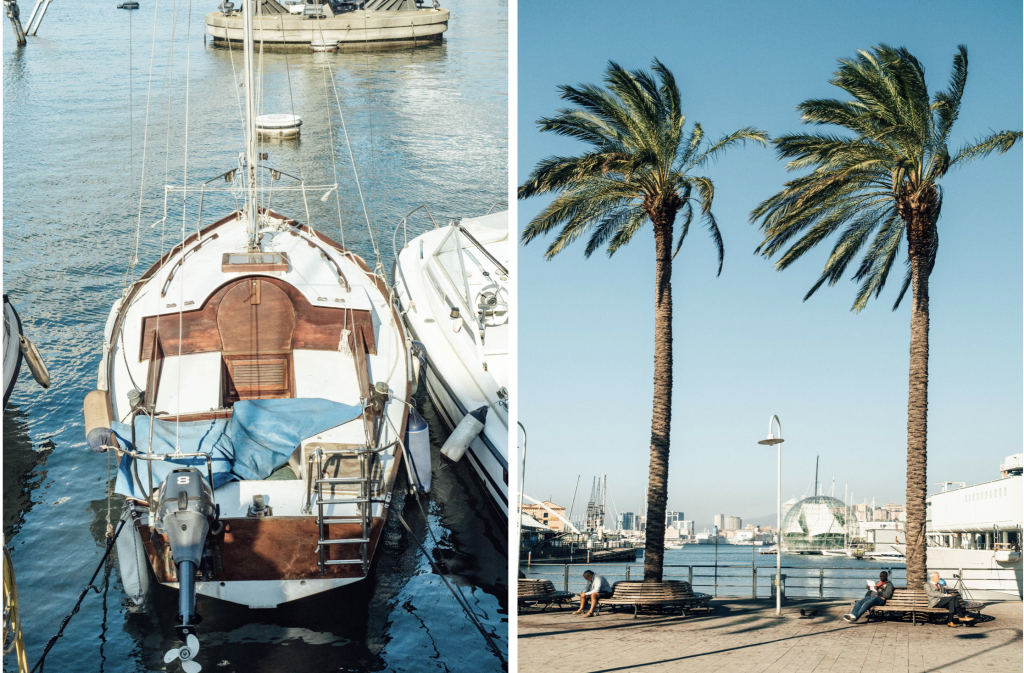 Genoa is the perfect place to really experience Italian culture without tourists or souvenir shops cluttering your travels. The people are kind, the weather is beautiful and you can’t ignore the beauty of the Mediterranean Sea sparkling in the distance. Travel by rail to spend at least one day in Genoa from southern France or other towns in Italy or fly from elsewhere in Europe for a one-of-a-kind stop on your European trip! 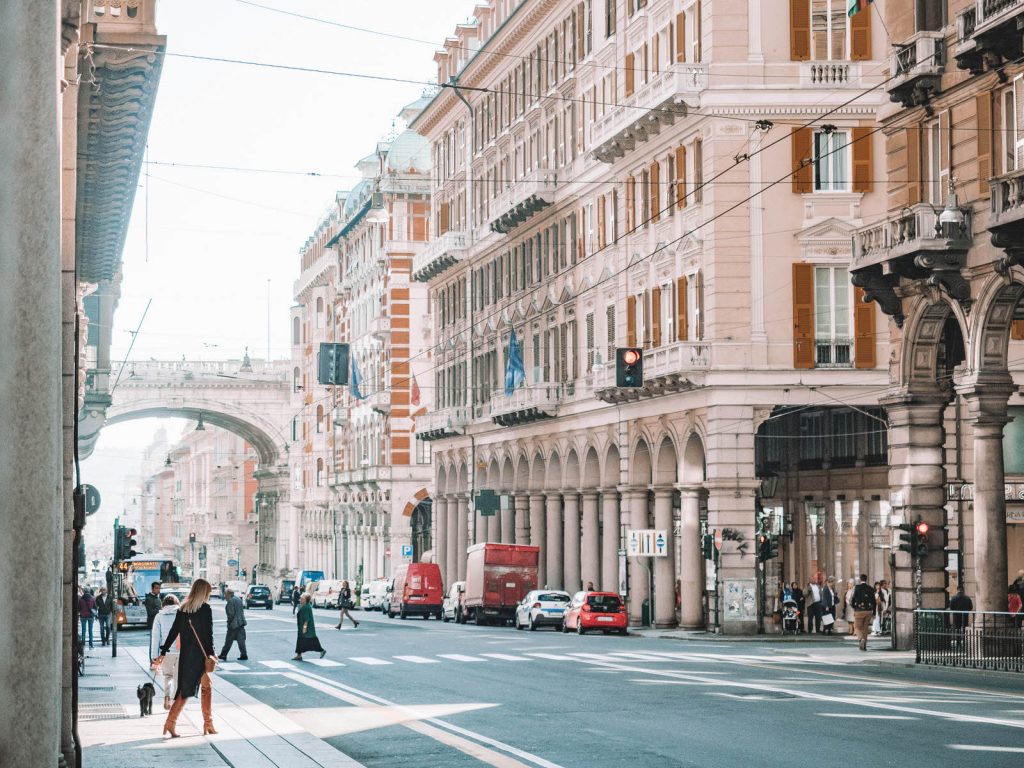 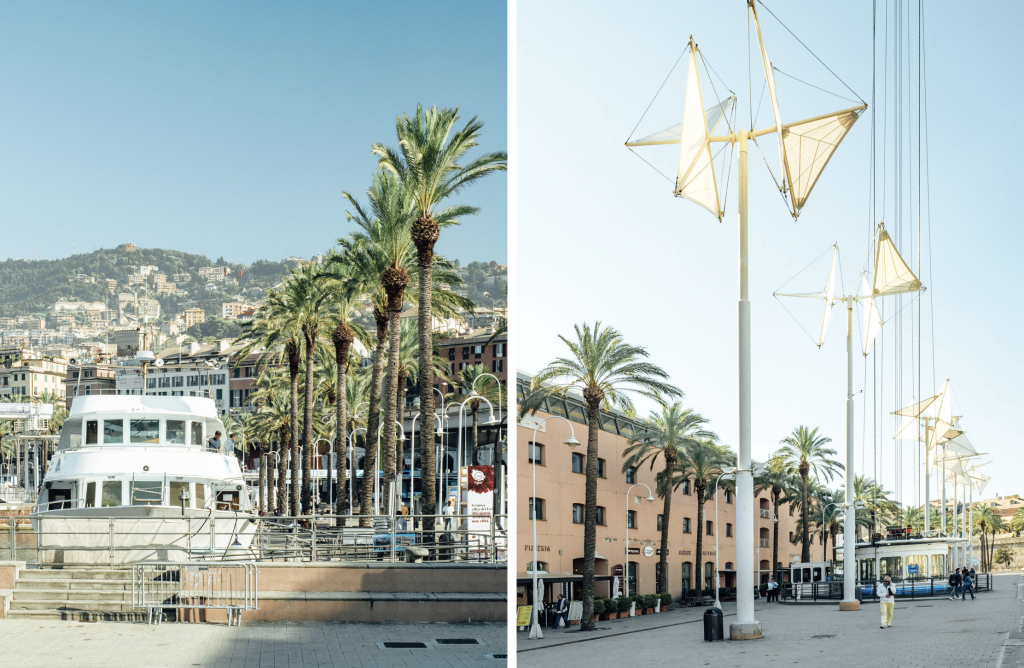 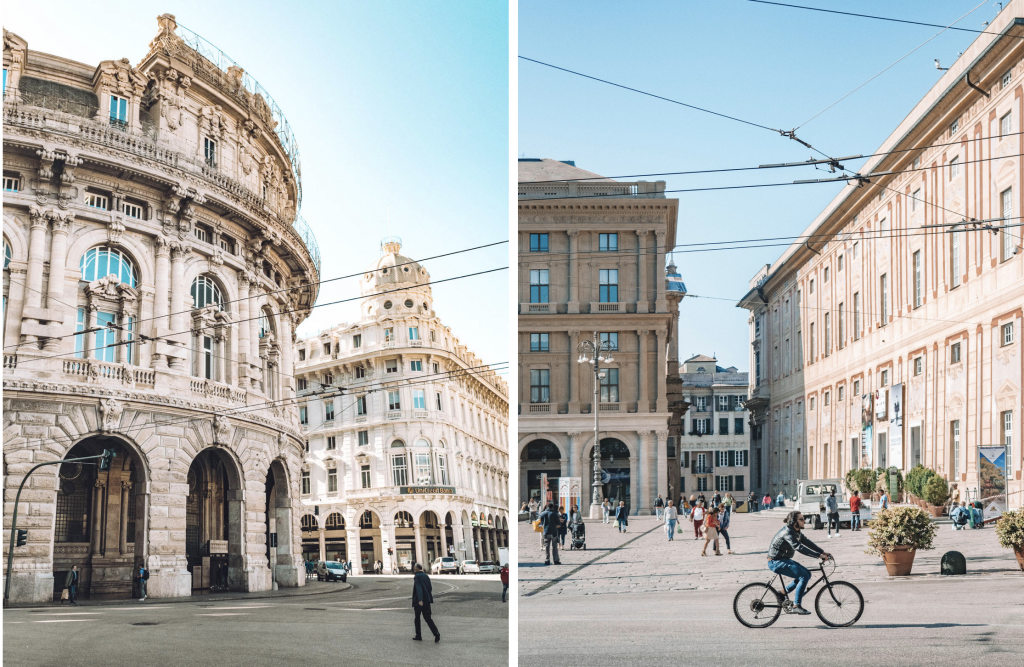 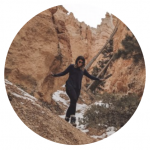